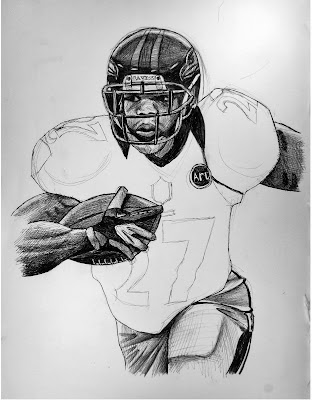 Ray Rice No.2 Drawing in progress

Running Back for the Baltimore Ravens, Ray has become one of the team MVP's, and a crowd favorite. Since being drafted in 2008, Ray is now second in rushing attempts, second in rushing yards, second in rushing touchdowns, and third in combined touchdowns, in the Ravens history. Last season in Superbowl XLVII, he won his first ring. He has gone to the Pro Bowl three times (2009,2011,2012).
My wife also has a big crush on him!!!
Posted by Stephen G. Bardsley at 12:06 AM No comments: 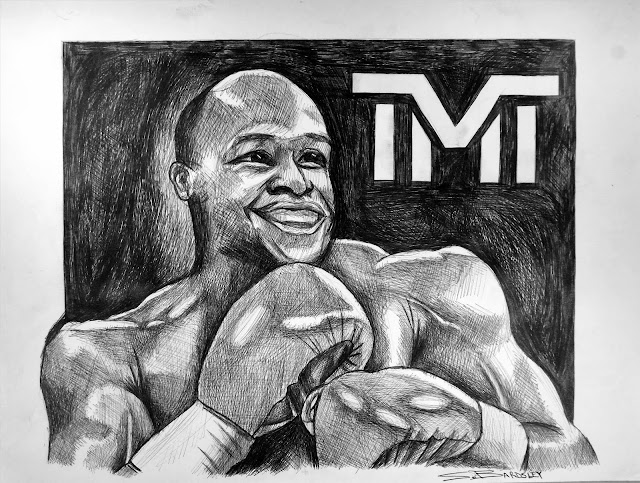 Floyd Mayweather Jr. Drawing
Floyd Mayweather Jr. is an American boxer. He has won World Championships in five different weight classes.His management and training team are called The Money Team.
Quite honestly there was a time when I couldnt stand Floyd! His nicknames are "Pretty Boy", from his amateur days, and "Money" from the millions he has earned boxing. He flaunts his money, cars, women, and taunts his opponents with non stop verbal sparring. In 2007 I was really routing for Ricky Hatton to destroy him. Ricky was from Manchester England where my father is from. The super fight was billed as "Undefeated" as neither fighter had ever lost. Floyd destroyed the hard punching, brawling Hatton, and knocked him out in the tenth round.
Floyd took two years off from fighting. Now every time there is a fight scheduled for him, the media hype is huge. The experts all agree that the new opponent is the one who will beat him. They all have the "Blueprint on how to beat Floyd." Floyd wins most of the rounds, and defeats the now usually younger opponent. Floyds professional record is now 45-0, and he is considered the best pound for pound fighter in the world, and many think of all time.
I have become a fan!

Stephen G. Bardsley
Laurens Husband, Joshua and Jacobs Father. I describe myself as a blue collar guy who draws some nice pictures.I told my Mother that I wanted to be an artist when I was 4 years old.

Interested in my work, I would love to hear from you. Thanks, Bards sbards3@hotmail.com